Are Poker Bots Profitable? | The Legality of Bots & How to Spot Them 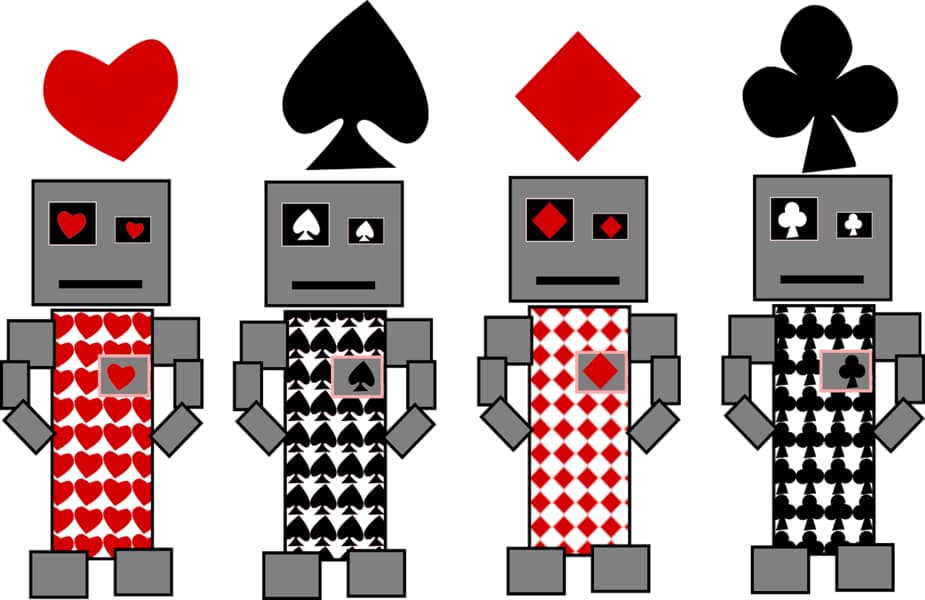 Technology seems to increase exponentially with each passing year. I have often wondered if poker bots are profitable and had solved the game of poker, making humans irrelevant. So I did some research and here are my findings.

Are poker bots profitable? Poker bots are currently only profitable at the lowest limits where the level play is poor. Bots are easily beaten by skilled players who are able to adapt to their predictable strategy. Also, advances in detection methods make it unlikely that poker bots will ever pose a serious threat to the viability of online poker.

If you want to know more about what bots including how they are made how to beat them, please read on.

What Is an Online Poker Bot?

A poker bot is basically just a software program that automatically makes poker actions while the human operator is away doing other things.

The idea is actually really alluring when you think about it.

Imagine sitting on the beach getting a tan while you are making passive income at online poker. I have to say, that sounds pretty dang good.

How Poker Bots Are Made

Poker bots come in two forms. Either you buy software that allows you to program it to play how you want or you buy it pre-programmed to be turn-key.

Today, bots are built to play all variations of poker including cash games, multi-table tournaments, and sit n go’s.

Most modern bot programs include something known as hopper.” What this means is that the entire process of loading and selecting tables is automated. You basically tell the bot what you want it to play, and then just click the execute button.

How to Spot a Poker Bot

Programmers have gotten pretty good at randomizing the timing of their bots to make it more difficult to spot them. Even so, there are a few things to look out for:

Should I Report Suspected Bots?

I have mix feelings about this one. While I don’t like the idea of people getting a free ride while I grind my butt off at the poker tables, I still realize that the vast majority of bots are lousy at poker.

I would much rather have a table full of bots then a bunch of lousy regs. At least the bad humans can adjust to my play! Give me the predictable opponents any day.

However, if I suspect a bot at the micro-stakes I report it every single time. I can’t stand the thought of some cheater taking advantage of people who are trying to learn the game.

How Many Bots Are There?

It is impossible to know for sure how many bots are being used at the tables at any given time. If I had to take a wild guess, I would say that most bots congregate at the lowest micro-stakes possible at 2NL, 5NL, and 10NL. Even so, I would speculate that less than 2% of the player pool are bots even at the lower limits.

It is highly unlikely that you will currently see any bots lasting very long at 100NL or higher. The regular players would simply dominate their predictability and drain the bankrolls of the bots very quickly.

I will not mention any actual bots programs in this article and contribute to their potential usage. However, it’s really easy to find them on the market with a simple Google search.

The Claims Made by Bot Producers Are Prestigious

While I won’t mention them by name, many bot makers claim that their users are having amazing results and raking in the cash

I am pretty confident this is hogwash. If this were the case, it would front page news and online poker sites would be going out of business left and right due to a scandal.

I briefly considered trying a few of the most popular bots out at the free money tables. In the end, I decided even doing that was too unethical since even play money players have the right to play in games that are not compromised.

Every single poker site in the world bans the use of bots. However, their usage is not technically illegal in most jurisdictions. While it is not likely you will go to jail for using a bot, you certainly can get blacklisted by poker sites.

Bot developers have gotten fairly good at creating bots that interface well with the major poker rooms. However, the poker sites are aware that these bots exist and are constantly implementing new ways of detecting them.

While the poker sites will not disclose the methods they use to find bots (for obvious reasons) it’s possible to make educated guesses on how they do it.

Here are a few examples of bot detection methods:

How Poker Sites Can Stop Bots

One of the most effective ways that poker sites are shutting down bots is through CAPTCHA technology. In fact, the poker site I currently play on forces me to go through a CAPTCHA process before I can even login. While annoying, I accept that this is necessary to ensure the integrity of the games.

Penalties for Getting Caught Botting

Anyone caught botting will generally be instantly terminated and have their bankrolls confiscated. You also run the risk of having your IP address blacklisted by poker sites.

Famous Cases of Bots Being Caught

How to Beat Online Poker Bots

If you suspect a player is a bot, there are several things you can do to win the max versus them:

If you see a potential bot with any of the following characteristics (via a HUD) aggressively play unbalanced to exploit those tendencies:

Since you know that a bot will not adjust to you, try to play bigger pots against them. This will amplify their collective mistakes against you.

For example, if you normally open raise for 2bb in the small blind, you might make it 4bb or even higher versus a bot. This is especially true if they fold to c-bet often.

You should want to play as many pots as possible against any opponent that has a static strategy. If you know exactly what a bot is doing post-flop, you can isolate nearly 100% of hands against them in position.

Bots have a lot of trouble basing their frequencies based on the bet sizing of their opponents. To exploit this tendency, I recommend making smaller bluffs than usually.

I once suspected a player of being a bot during a session. In a particular hand, it was the river and I had barreled the flop and turn. On the river I had no showdown value. Instead of shoving all-in like I typically would int hat spot, I bet 2 big blinds. The potential bot instantly folded and I scooped a massive pot.

Just remember, your mileage may vary when employing these strategies and that s math wins out against unbalanced players.

The History of Poker Bots

The earliest evidence I can find about poker bots is in 2005. A program known as “WinHoldem” was being used by players on the major poker sites. It used a rudimentary programming system that had to be individually customized by the player. Almost exclusively used in Limit Hold’em, you could purchase pre-programmed versions online.

The Future of Bots

I am not worried about bots becoming a big problem, at least not in our lifetimes. Even the most advanced robots in the world are still dumber than a goldfish. Furthermore, poker is such a complicated game that it is virtually impossible to account for every possibility at the table.

The closet thing to being “solved” currently is the sit and go via ICM. Even so, this doesn’t guarantee huge win-rate and is only one mathematical tool in forming a strong strategy.

I was actually a bit nervous about researching bots. I am paranoid that the site I play on will detect my searches and send me a nasty email warning.

All joking aside, bots are here to stay. Rather than worrying if they are on your table, it’s best just to be aware that they exist. Instead of complaining about bots, just celebrate their existence and realize that having one on your tables is actually a blessing and one of the most profitable situations in poker.

I hope I have provided you the knowledge and tools to deal with bots. Please comment if you have any of your own ideas on the subject.

Can poker be solved? Poker is perhaps the most complicated game in the world that has a human element. Due to the lack of perfect information, it is highly improbable that the game could ever be completely solved. This is especially true for Texas Hold’em where you can never know the exact cards your opponents hold and can only make educated guesses based on the actions of each player.

Is using poker software while playing online poker legal? It is legal to use certain poker software programs while playing. For example, tracking software such as Hold’em Manager or Pokertracker are used widespread across almost every poker site in the world.