Are Poker Huds Legal? | The Tracking of Poker Players Explained 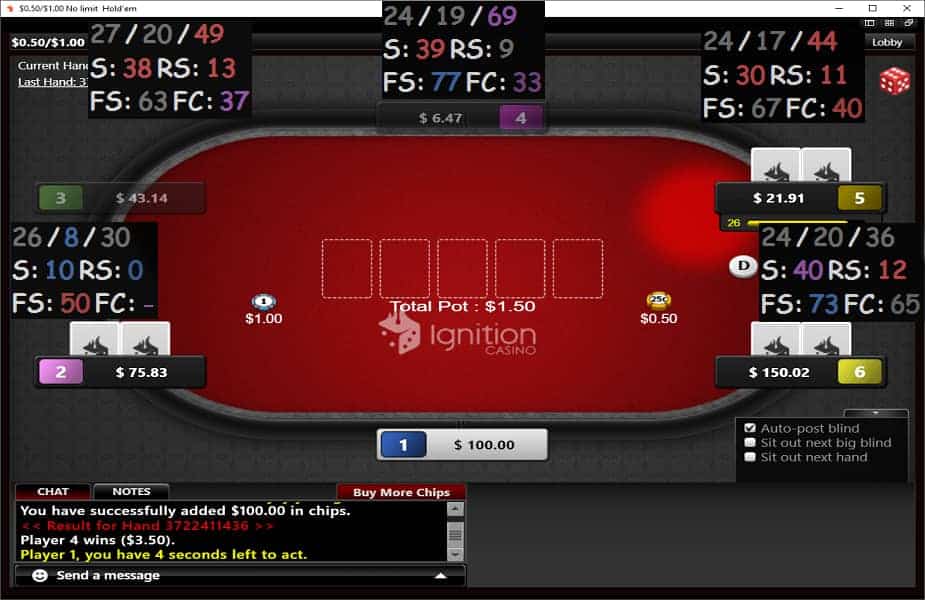 The tracking of poker opponents has become widespread over the past dozen or so years. The legality of poker heads-up-displays (HUDs) has been debated quite frequently during that period. I have played on just about every poker site and used hundreds of different HUDs and can give you a definitive answer.

Are poker HUDs legal? Heads-up-displays, or HUDs, are legal to use on nearly all online poker sites. However, in recent years there is an industry-wide movement toward limiting their use. A poker site’s terms of service will usually disclose its policy regarding HUDs within their website.

The tracking of players via third-party software has had a profound impact on the game since around 2003. I have done quite a bit of research on the subject and will let you know everything you need to know about how HUDs are used and what the pros and cons of them are.

What Is a Poker Hud?

HUD stands for “Heads-Up D.” A Poker HUD is a graphic that displays statistics in a box or grid near an opponent. The stats reveal the frequencies of the opponent’s poker actions. The person employing the HUD can choose to display whichever statistics they choose.

The most common statistics displayed in a poker HUD are:

There are also literally hundreds of other detailed stats that are usually available to be used in a HUD.

Where Does a Poker HUD Come From?

In order to use a HUD at the poker tables, you are required to have a third party poker tracking software program.

Basically, the software gathers hand histories while you play and processes the information. The data collected is then used in manifesting the heads-up-display on your table.

Who Uses HUDs and Why?

Today, HUD use is widespread in online poker. Even many recreational players, who often have no idea how to effectively use the information, have a heads-up-display on their tables.

However, in the hands of a skilled amateur or professional players, these statistics can be used to profile and pick opponents apart with precision. It’s true that, even though anyone can use a HUD, their prevalence significantly favors the studious.

HUDs have given skilled players the ability to:

Ambitious Players Are Forced to Use a HUD

The pervasiveness of HUD-use has given a profound advantage to the players who use them versus those who do not. This fact forces players, who would otherwise eschew the practice, to join the flock.

In short, either you learn to use a HUD (and well) or you are at the mercy of the regular players (regs). People have gotten very good at building HUDs that can pinpoint an opponent’s leaks in subtle yet profound ways.

In fact, it has become almost an arms race as to who can better detect the leaks of the opposition. There is also an entire generation of poker players who are completely lost if forced to play without a HUD.

The two most often-used software programs that have a HUD feature are Hold’em Manager (HEM) and PokerTracker (PT). While these are still separate software programs, the two companies that created them have merged as of 2014. It is unclear whether one version will be phased out or not.

Both HEM and PT offer advanced HUDs that can tell you, in detail, what another player is doing across multiple streets. However, if you just want basic stats then there is an alternative program called Hold’em Indicator.

How the HUDs look

The Hold’em Indicator HUD (shown on the LT) gives all the basic stats while HEM and PT allow you to fully customize a HUD to tell you whatever you want to know about another player.

How to Make a Poker HUD

Building a customized HUD is actually really easy. Here is a video tutorial I did that will give you some insight into how it’s done.

Even Legal Poker Tracking Software Has Made Winning Tougher

There is actually a lot of irony surrounding “game improvement software” since it actually has made it more difficult to win. The near universal usage of programs that allow deep statistical analysis and HUDs, has created quite a bit of parody among the regs. However, there unintended consequences for this statistical “arms” race.

It is my opinion that the hyper-analyzation of opponents has led to an unfair playing environment.

There is now a huge gap between so-called good players and the recreational part-time player. Unskilled players go broke quicker so there are less of them playing in the games

many poker sites, it has now come down to being a battle for who can win enough money from the very few unskilled players to eke out a tiny win-rate.

Additionally, almost all recreational players know that “the pros” are using tracking software. They may even view the practice as a form of cheating. This has led to many poker sites increasingly becoming a fish desert as “fun” players leave the games or move to more recreational-friendly poker sites.

No one wins when almost no one can win anymore. Literally.

They Took It a Bit Too Far

I actually think that basic HUD use is good for the game and that everyone should have access to them. As long as the information is something that can be gathered by observant players anyway, there really is no harm in it.

However, the tracking software companies went a bit too far with it.

Being able to analyze exactly what an opponent has done on the river over the past 500,000 hands is a bit ridiculous.

The Advent of Auto-Rate and Badges

There are two features that the major tracking software companies have that allow opponents to be further exploited:

Data-mining Was the Death Knell

You are supposed to only be able to have stats that you could have collected through your own observation. However, there are online businesses that collect and sell hand histories to anyone willing to buy them.

While this is universally forbidden by all major poker sites, it has not stopped unscrupulous players from partaking in the practice.

The result of data-mining is that hardcore players can have tens of thousands of hand histories on players they have not even played a single hand with. Unsuspecting players are picked apart as a result.

It is worth mentioning that cash game players are not the only ones who have to worry about being unfairly targeted by bad actors. A tracking site designed for sit n’ go players has also been around for years.

Sharkscope allows you to see detailed won/loss histories from opponents and now even offers a HUD with stats similar to those found on HEM and PT. Once again, these stats are unfairly obtained and outlawed by most poker stats. Unfortunately, that does not stop players from still using them.

Why Some Poker Sites Don’t Limit Hud Use

If HUDs truly hurt a poker economy and, in turn, a poker site’s viability, then why are they not being banned by every site? The reason is two-fold:

The Recent Movement Away from Allowing Huds

While some poker sites have chosen to ignore the problem of a failing poker economy, some have embraced a new way of protecting players.

There is a whole new generation of poker sites that have taken steps to create a safer environment for players. There are a few basic ways they have done this:

The Proof Is in the Win-Rate

I have played on two of the major recreational poker sites and have to say that it makes a huge difference in my win-rate.

In the samples, I was testing some of my poker charts that I have been working on for years and not playing my A game by any stretch of the imagination. However, I was able to pretty much crush it (for 8.62bb/10) on Ignition across all stakes. On ACR, it was hard to even beat the micro-stakes.

If you are looking for a place to play where you don’t have to worry as much about other players knowing every little aspect of how you play, I recommend trying the sites listed below.

Sites Who Have Limited HUD Use

For US players I recommend Ignition Poker. For anyone else in the world, Unibet is a really good option.

If you love to dive deeply into stats and don’t mind other players doing the same, there here is a list of sites you will want to try.

Sites with Unlimited HUD Use

If you want a balance between soft games and full HUD use, I recommend BetOnline or Sportsbetting Poker (same network). You will have to use a card catcher to get hand histories, but it is well worth the small expense.

While PokerTracker was originally released in 2001, it wasn’t until 2003 until the real game-changing moment happened.

When PokerTracker 2 came out, something called the “PokerAce” HUD was added as the first commercially viable HUD.

The “Golden” Age of HUD Use

For the next few years, there was a lack of awareness about this software in the general public. All the while, serious players are pros were raking in the big bucks by having a huge informational edge on their opponents.

However, in 2006 Hold’em Indicator was released. It had a much more user-friendly feel to it and included a helpful odds calculator built into the software. The rudimentary HUD came as a feature and help level the playing field a bit.

In 2007, Hold’em Manager came out and took things even further. Even more detailed stats emerged and eventually, more advanced ways of tracking players were added. With auto-rating and then Notecaddy, poker geeks were in hog-heaven. Table selection and finding weak players became really easy.

Today, it looks like the writing on the wall that tracking software and HUD-use in it’s current form is in decline. No major released or updates have come out in several years.

My advice to them is to go the route that Javaro has and simplify things and work directly with sites to comply with the changing poker environment. I think they should keep the deep statistical analysis for players to do on their own games but limit and discourage the unethical exploitation of weaker opponents.

The first 15 or so years of the online poker era have been a wild ride. The development of player tracking tools has heavily influenced how poker sites currently operate.

As with anything, there is an ongoing dialectic on what the experience of poker players should look like. Right now we are trending toward finding balance and more enjoyment for all players.

I am hoping this attitude brings more players into the game and the viability of online poker lasts indefinitely.

If you want to know more about poker strategy, I created a comprehensive tutorial. Thanks for reading!

How can I track my statistics as a live player?  are several apps available for both Android and Apple. My favorite and the one I currently use is Poker Bankroll Tracker.

What is VPIP and PFR? VPIP and PFR are the two most common stats that players have in their Heads-Up-Display or HUD. VPIP means “Voluntarily Put In Pot” and PFR means “Pre-FlopRaise.”