Who Shows Their Cards First in a Poker Showdown? 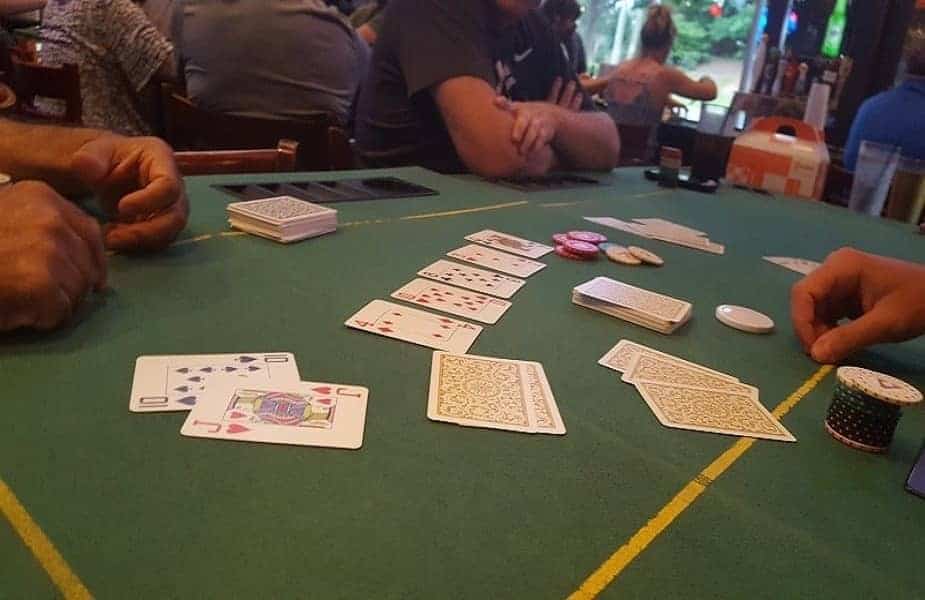 When showdown is reached in a poker hand, it can often be a confusing moment for live poker players. Deciding who shows their cards first is a common argument in both tournaments and cash games. Let’s settle what the showdown rules are once and for all.

Who shows first in a poker showdown? The showdown rules of poker state that the player who took the last aggressive action on the final betting round shows their hand first. If everyone checked during the last betting round, the normal order of play is followed and the closest player to the left of the dealer shows their cards first.

While the order of showdown after the river is fairly straightforward, there are a few nuances that need to be addressed. Whether you play Texas Hold’em, Pot Limit Omaha, or some other form of poker, these rules will apply to you. Below is some more information you might find use

Why Does the Last Aggressor Have to Showdown First?

In many river scenarios, a player will face a large bet from an opponent and have a tough decision on whether to call or not. If the call is made the player is rewarded by getting to see the cards of the person he called first. He or she is said to have, “paid to see the hand.”

Why Is the Showdown Order Different When Everyone Checks?

If everyone checks on the river the normal order of play is followed. Since there has been no bet and no call, no one has bought the right to not have to show first.

Does the Showdown Order Vary from Game to Game?

The showdown order remains the same whether the game is Texas Hold’em, Pot Limit Omaha, Stud, or any variant of poker.

Do I Have to Show My Cards in Poker?

There is generally no requirement to ever show your cards in poker. You can fold or “muck” your hand anytime during play. In fact, the only time you are required to show your hand is in order to win the hand at showdown

To win a pot, a player must table both cards face up to qualify for winning the pot. Just keep in mind that some card rooms do have slightly different rules regarding showing hands, be sure to ask the dealer if unsure.

Beginning players sometimes misread their hand may even fold a winner. So until you become a skilled winning player it’s probably best to always show your cards at showdown, just in case.

Can I Just Show One Card at Showdown?

You can show just one card at showdown. However, showing just one will not qualify you to win the hand even if that one card is revealed that you definitely have the best hand.

It is a universal rule among all card rooms that both cards must be tabled faced up in order to win a pot.

What an Opponent Refuses to Follow the Correct Showdown Order?

Some players will often try to get their opponents to show their cards out of turn so that they can try to avoid giving away information. If you encounter this situation and they are attempting to get you to flip your cards first, my advice is to politely say, “it’s your action, please either show your hand or muck your cards.”

If the opponent still refuses to follow the correct showdown order, ask the dealer to step in and enforce the rules. Do not let a rude or forceful person get their way. Poker is no place to get bullied.

Are There Any Exceptions to Following the Correct Showdown Order?

There is one exception to the rules of showdown order. If you hold the nuts or a very strong hand, it is a common courtesy to just instantly flip your cards over on the river no matter what the showdown order is. Otherwise, you might be accused of “slow rolling.”

If I Call the River Can I Ask to See My Opponent’s Mucked Cards?

Sometimes part of the reason a player will call is to gain information from his or her opponent. While it is mandatory for your opponent to show their hand if you request them to, it is almost universally frowned upon as bad etiquette if your opponent wants to muck their hand.

The reason it is bad etiquette to ask to see mucked cards, even if you are entitled to, is that it will often embarrass your opponent. It is widely accepted that just winning the pot should be enough for a person making a correct call. Rubbing it in your opponent’s face by forcing them to show their inferior hand or bluff is in poor taste.

What If Someone Shows Their Hand out of Turn?

At showdown there is no penalty in just flipping your cards up out of turn. However, most people like to see what cards people acting before them have before deciding to show or not. If you are beat, you can simply muck and not give away any information to your opponents.

What If There Is a Side Pot and Someone Is All-In on the River?

Sometimes a player will be all-in and there will be two or more other players who still have chips behind. In this case, the betting round continues until showdown is achieved.

Once showdown is reached it is generally good form for the non-allin person to show his or her cards last, regardless of their position.

Are the Showdown Rules Different Between Cash Games and Tournaments?

In general, showdown is the same no matter what format you are playing. The only exception is that in cash games a person may show one or both cards at any point during the hand without penalty.

In tournaments, if a player exposes their cards, whether intentionally or not, the hand is usually considered dead.

Is There Ever a Time to Showdown a Weak Hand Versus Mucking It?

If it’s your turn to showdown your cards and you have a hand that is obviously losing, you generally want to just muck and not give away any information. However, there are a few instances you may want to go ahead and show the hand.

What is considered a muck in poker? The meaning of “mucking” a hand in poker is to fold or discard a hand without revealing your cards. Players often much their hand to avoid giving away information to their opponents.

Who goes first on after the flo? The order of play on the flop, turn, and is the same. The small blind always acts first and the dealer button always acts last.

How does all-in work in poker? All-in means that a player has no more chips behind to cover any future bets made. In this case, the player is declared “all-in” and will keep his or her cards face down until the showdown is achieved. An all-in player cannot win or lose any more than is contained their starting stack.

Showdown at poker is one of the situations that few players truly understand the actual rules. The cool thing is that once you know exactly how it works you can use the information to your advantage

My advice is to never show your hand until it is your turn to do so, unless of course if you hold the nuts or near nuts. Never slow-roll your opponents. Unless of course you like being disliked by everyone in the poker room.

For more, don’t miss What Happens If You Have the Same Hand in Poker? Can There Be a Tie?.