Can You Play Poker with 2 Players? 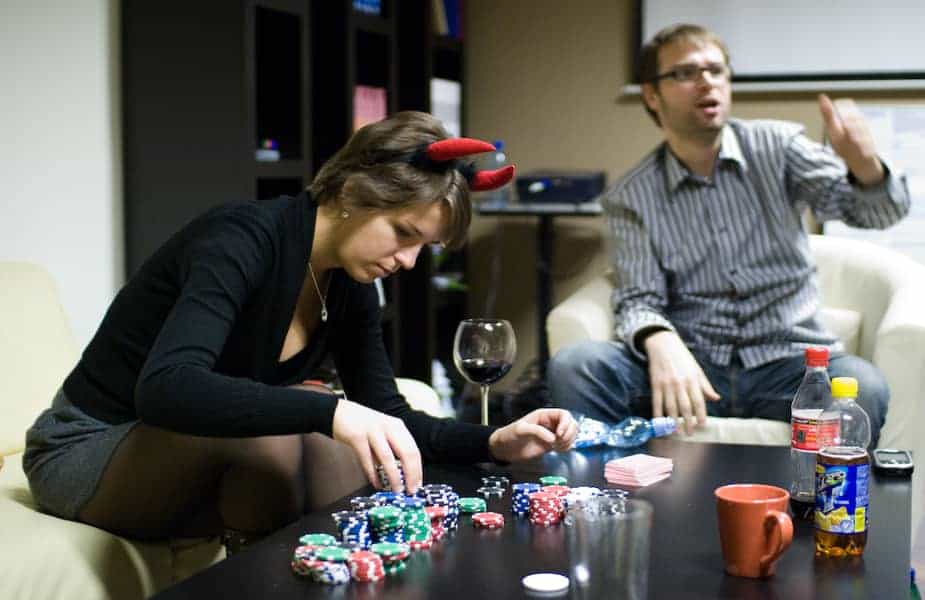 It’s a weekend and you and a friend or family member are wondering if you can play a game of poker with just the 2 of you. I have been playing for over 10 years and can give you a definitive answer.

Can you play poker with 2 players? Poker can be played with only two players. It is called heads-up. Here are the two player rules:

What Are the 2 Player Poker Rules?

Now that you are set up to play, let’s cover how to play 2 player poker. Here are the basic rules that you will need to know in order to play your game.

You may want to keep this page open in your browser in case questions come up during play.

1. How do the blinds work in 2 player poker?

How the blinds work is probably the most confusing thing in heads-up poker. However, once you get the hang of it it’s not that difficult to remember since there are only a couple of differences between 6-max or full-ring rules.

Who Is the Big Blind Who Is the Small Blind in Heads-Up Poker?

big blind is always the player who does not have the dealer button in front of him or her. That means that the person dealing is always the small blind.

How Do We Determine Who Gets the Button First at the Start of the Game?

The easiest and most fair way to determine who gets to be dealer first is for each player to draw a card from the deck. The high card gets to deal first.

2. How Are the Cards Dealt in 2 Player Poker?

Which Blind Gets Dealt to First Before the Flop?

The big blind gets the first card and the dealer gets the second card in heads-up play. The easy way to remember this is that the dealer never deals to his or her self first.

Can the Same Person Deal Every Hand?

It’s true that sometimes one person is better at dealing. In this case, it’s okay for the same person to every hand

Just make sure that you move the dealer button each hand. It would be highly unfair if the same person had to play the big blind every single hand!

3. Who Goes First When Only Two Players Are Playing?

I remember walking up to observe the heads-up match between two friends in pub poker. I quickly realized that they were following the opposite order of play that they were supposed to.

I did not want to embarrass them so I kept quiet. It was apparent everyone else didn’t want to as well since none of the 10-15 observers said anything!

Who Goes First Before the Flop?

This rule is exactly the same as pre-flop however, it is easy to get wrong for inexperienced players. The easy way to remember it is that the big blind player acts last before the flop in 6 or 9-handed games, and it makes to work the same way in heads-up.

Who Goes First After the Flop in Heads-Up?

This rule is also exactly the same for normal poker games. The dealer gets to always go last on the flop.

The biggest perk of playing on the dealer button is that you get to act last and have more information than your opponents. This is especially powerful in heads-up since the big blind can never act last.

What If the Dealer Open Folds in 2 Player Games?

When the Dealer decides to not play his or her hand before the flop, the small blind is relinquished to the player in the big blind. The dealer button then moves and the next hand begins.

Is it better to play Heads-Up, Cash Games or Tournaments?

Deciding what format to play in 2 player poker all comes down to personal preference. Each type of game has its perks.

There are a couple of reasons people might choose cash games over tournaments:

Even though I am a cash game specialist, when I play heads-up I actually prefer tournaments. Here is why:

If you don’t have poker chips, there are likely plenty of poker chip substitutes lying around the house or office.

The way it works is that each player starts with 20, 30, or 40 big blinds and then play cash games. The blinds do not rise, but there is still plenty of heavy pre-flop action with lots of reraise shoving

Post-flop also plays a lot easier as a short stack. Top pair is an easy hand to get all-in with when short whereas it can be difficult to play when deed-stacked.

What Is the Best 2 Player Poker Strategy?

The biggest adjustment when playing heads-up poker is that marginal hands go way up in value. 3rd pair or even high card Ace can often win at showdown.

So, loosen up and don’t let your opponent run you over if he or she bets a lot! Conversely, you should bet often when you have any piece of the board or a credible bluff. There is a good chance your opponent might fold a better hand or pay you off with a worse hand.

What 2 Player Games Can We Play Besides Texas Hold’Em?

If you are tired of heads-up No-Limit Hold’em and want to mix in another game occasionally, there are several good options:

Accessories to Make Matches Even Better

If you want to make your games more classy, then I recommend picking up quality accessories. I wrote recommendation articles for each category, just click the links to learn more:

Playing heads-up only happens in tournaments if you are the last two players left in the field. However, 2 player poker is something you can do for fun either as a cash game or tournament at home.

If you want to read more about heads-up poker, I wrote a detailed article on Heads Up Poker Rules for Texas Hold’em.

Do you have to match the big blind is poker? In order to qualify to see the flop, you must at least match the amount of the blind.