What Is Meant by Position in Poker? | Position Explained 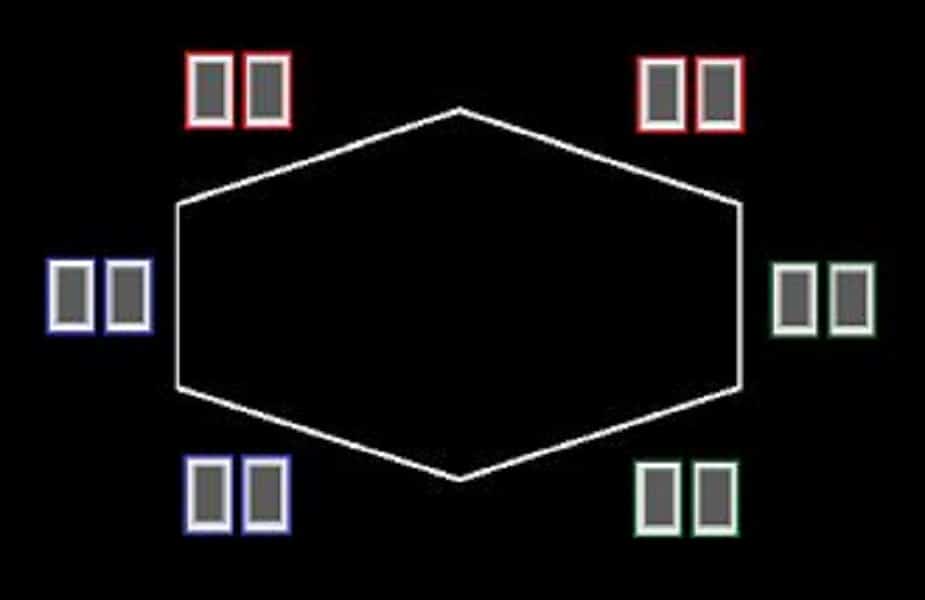 Understanding the basics of position is perhaps the most important poker concept to master. The reason this is the case is due to poker being a battle of information with position playing a key role in that fight. The great thing is, learning how to play position is really not that difficult since there are only two possibilities during a poker hand: either you are in position, or out of position.

So what is meant by position in poker? Playing in position means you act last on all streets. Playing out of position means you do not act last. Only the player on the button is to have guaranteed post-flop position. After the flop, a player’s position stays the same throughout all streets (Flop, Turn, & River).

How Does Position Work?

In poker games with two blinds, like Texas Hold’em and Omaha, position is based on the order of actions which varies based on the stage of the hand being played. Those two stages are separated into before the flop, or pre-flop, and after the flop, known as post-flop. Your seat at the table relative to the other players is what determines whether you are in or out of position.

What Are the Poker Seats?

Before in and out of position is explained, first, let’s review what the names of the different seats or positions are at the table. There are 6 key poker position names that you need to know. If you haven’t already, be sure to memorize the abbreviations for the names of the various positions since most everything you read about in poker will use them. They are:

Here are the positions, shown on a 6-max poker table. For 9-max, you would add UTG+1, UTG+2, and UTG+3 between the UTG player and the HJ.

How Does Position Work Pre-Flop

Pre-Flop, the first person to act is the UTG player. The action continues around the table in a clockwise manner with the Big Blind acting last. The easy way to remember who goes first is by remembering that the person sitting next to the Big Blind always acts first unless there is a straddle.

While it’s important to understand the order of play, building a strategy based around position has little to do with pre-flop. Your play before the flop is almost always built around setting up the most favorite post-flop situation for yourself. That is why when most people are talking about position in poker, they are referring to whether you act first or last after the flop.

After the flop, the Small Blind acts first, followed by the Big Blind, so on and so forth. Starting with the SB and moving clockwise, position progressively improves as you move toward the button, as does the likelihood that a player will be in position.

If all players are involved in the hand on the flop, the Small Blind acts first, followed by the Big Blind, then Under-The-Gun, continuing clockwise until the Button is last to act. The only sure seat to be out of position is the SB, and the only seat sure to be in position is the BTN.

You do not have to be on the Button to have position. If every other player involved in a hand is to your right, you effectively have position on them. For example, you call the raise of the UTG player while seated in the HJ, and everyone else folds. You are now effectively in position. As a side note, the only players the UTG player can ever be in position against are the SB and BB.

Why Is Position Important?

Poker is a game of information. Therefore, being able to act after your opponents gives the player in position the benefit of extra information. Here are 3 other reasons position is so valuable.

To sum it up: While in position, you get more value with your strong hands, lose less with your weak hands, and often get the chance to catch up with some of your weaker hands for a cheaper price. Add in the extra information, and you can see why the Button is always the most profitable seat in poker.

The Negatives of Being out of Position

Beyond what we have already discussed the negatives of being out of position, there is the subject of initiative. The player with the initiative is the person who has the lead going into the flop. In other words, the last pre-flop raiser has initiative.

Initiative allows a person to win a lot of pots without having a strong hand. One of the more common ways a hand plays out is that a person raises, another calls, the initial raiser continuation bets, and the opponent folds.

One of the most common scenarios is to have the Cutoff or Button player raise and have one or both players in the blinds call. In this case, the SB and/or Big Blind are fighting a two-fold uphill battle. Since they are both out of position and do not have initiative, they are basically forced to make a hand in order to win the pot. And, since it is difficult to flop a strong hand, more often than not they are just check-folding.

This style of fit or fold play is hugely unprofitable. A player simply won’t make enough strong hands to pay for the times he is forced to check-fold. Therefore, in order to profitably enter a pot, players in the blinds need a much stronger range of hands to do so. Conversely, the positions that are most often in position, namely the CO and Btn, can play a much wider range of hands. This is due to the advantages we have already discussed, along with initiative. You may have heard this referred to as the “Gap Concept.” Now you know why the concept exists.

For example, a hand like 97o would be very difficult to play profitably from the blinds with a call. Yet, this is a standard hand to open raise, for most players, in late position. Here is how I did with 97o on the CO and BTN during my spare change challenge.

As you can see, I won $57 more than I would have if I folded. When you realize that’s just one hand, you see the value of position in poker. In case you’re wondering, yes I did call with 97o. However, it was only 6 times and in a blind-versus-blind situation where I was guaranteed position! (I won $3.10 by the way, yay

Is It Ever Better to Be out of Position?

There are very few instances where you would rather be out of position that can be planned for. In fact, the only one that comes to mind is when it comes to 3-way pots after you have made a call pre-flop. In that case, it is better to have good relative position rather than absolute position.

What is Relative Position?

This is an advanced concept and an exception to the rule about position. While it is almost always best to act last, sometimes it isn’t. If you are involved in a 3-way pot after the flop, it is often better to be seated directly to the right of the person who was the pre-flop raiser, regardless of who acts last. The reason being, you get to see what the person to your right is going to do before you have to act.

Example: You flop a relatively strong non-nut hand and plan to check raise the continuation bet of the pre-flop raiser. However, before you can do so, the player to your right instead re-raises before you get the chance. In many situations, this action shows immense strength, since the re-raiser knows that you are still left to act. In other words, it takes a much stronger hand to re-raise against two people than it does versus just one. And, since you have good relative position, you may now decide to throw your medium strength hand away.

The value of relative position is that it often saves you money before you have to fold. In the above example, if you were to reverse seats with the person to your right, it is likely that you would have had your re-raise re-raised, and been forced to fold your investment when action came back around to you.

Other Impacts of Position

As we have briefly discussed, one of the most direct consequences of position is that it basically determines which hands we can profitably enter the pot with before the flop. In fact, your entire opening range choices will be based on your likelihood of being in or out of position after the flop. This is why players open much tighter under the gun than they do in later positions. In order to make better choices on which hands to open raise before the flop, it is helpful to group the positions into three categories: Early, Middle, and Late position.

Mastering the concept of position is the single most important thing anyone can do if they want to be good at poker. In fact, the vast majority of mistakes made at the table are typically positional errors. That is why the concept of position is my number one fundamental of poker, ahead of initiative and pressure. Virtually all strategic and tactical planning starts with position.