Why Do Poker Sets Come with Dice? 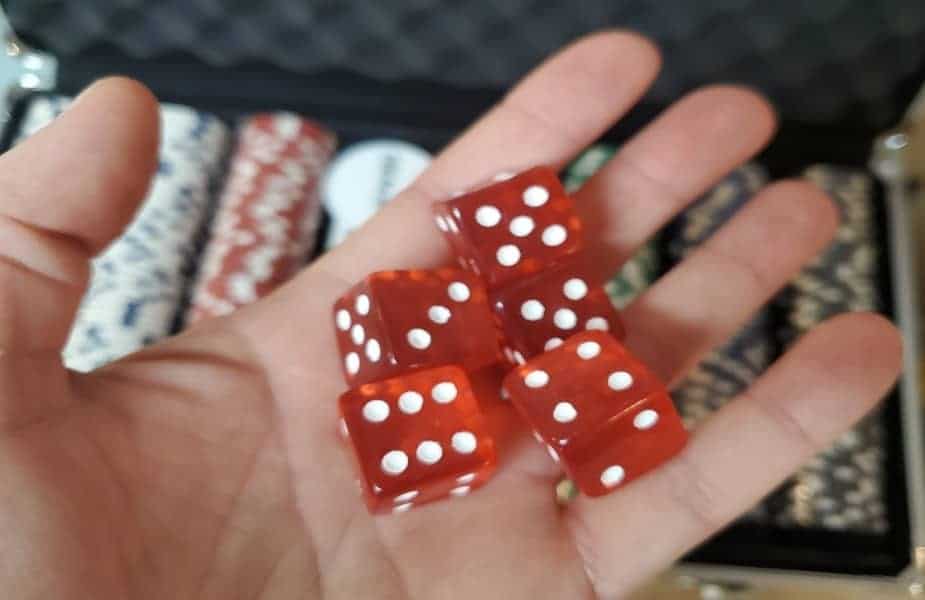 When playing poker, all you need is some cards, chips, and someone to beat. The ability to successfully bluff is undoubtedly useful for winning too. So, why then do so many poker sets come with five regular dice? Have I been missing something from this classic game all these years? Or is there some other reason for the inclusion of dice in the poker set?

The earliest poker sets to hit the American market included dice, and that tradition continues today. The reasoning behind their inclusion, however, is not well-documented. Despite this, there are three leading theories as to why the dice were included in the first place. Let’s dive into the possible reasons why poker sets come with dice and what consumers have done with them since.

1. Allows the Chips to Be Used for Playing Other Games

It is highly likely that the original manufacturers of poker sets had specific games in mind where they added dice into the mix. In fact, this is the most logical reason and the one that makes the most sense. My background in history is screaming to me that this is the real reason.

Here are a couple of the main contenders for why dice were added.

Poker dice is a game that allows people to play a form of poker without having cards. The way it works is that each player rolls 3 times and the best hand wins. The reason I think this may be the reason dice are included in poker sets is because it exactly requires 5 dice.

The only problem with this theory is that the game is usually played with special dice (Click to see an example on Amazon) that have a representation of playing cards on them instead of pips. However, it is possible to play poker dice using regular dice.

The game of craps in an American invention, evolving from the European game Hazard in the 1800s. It is a game of chance where players predict the outcome of a series of dice rolls. Chips in a poker set can easily be used for playing craps.

The issue with this theory for the inclusion of dice in a poker set is that craps only requires two dice, not five. However, this is the most common use of the dice sold in poker sets today.

2. Adds Value to the Set

There’s no doubt that including dice in a poker set increases the product’s worth and versatility. As a result, consumers can use the product to play craps or add house rules to their poker night with rolls of the die. Also, dice are inexpensive to manufacture, yet their addition in a poker set adds far more value to the product than their cost.

By incorporating a set of five dice with a deck of cards and poker chips, the “gaming set” definitely widens the audience that might buy the product. That’s because most gambling-based games involve dice, cards, or chips, or some combination thereof. The funny thing is that no game though requires all three, thus the confusion.

As consumers like their products to have versatility, including five cheap dice to a deck of cards and some chips, may have helped drive sales. Adding dice may have been a marketing ploy, but it has been an effective one.

Many poker sets are sold in a metallic carrying case with stacks of chips presented either side of two decks of cards. These cases have a standard dimensional width to accommodate a 6.5-inch stack of fifty chips.

For packing, the decks of cards are laid horizontally in the middle of the chip stacks. As a standard poker deck of cards is 2.5 inches wide, there is a 1.5 inch of space left in the center of the case. This space can be filled by adding a strip of dice. Five dice are almost the same length as the height of a deck of cards – 3.5 inches.

The effect is that the packaging looks clean, and the set appears full. Despite their gambling utility, dice may be included in poker sets entirely for their aesthetics rather than to be used as part of a game.

While the dice are not directly related to poker gaming, creative players have developed “house rules” to incorporate them. Some have reported using the dice as a mechanism for determining the winner of a split pot. Others have utilized the dice to determine how much the big blind should be by using the dice a multiplier.

While many poker sets come with five standard dice, their inclusion isn’t for enhancing the game of poker. Instead, they are probably just for playing other games, increasing the value of the gambling set, and heightening the versatility of the poker chips themselves.

Do you have another theory as to why dice are included? If so, please leave a comment below.

What Are Poker Dice? Poker dice are the same size and shape as regular dice. However, instead of each face displaying the traditional number pips of 1-6, the faces depict either a nine, ten, jack, queen, king or an ace. Five dice are rolled to create a poker hand, with five-of-a-kind being the best combination. Much like Yahtzee, each player gets three rolls to make the best hand.